It is only stating the obvious if we say that actual, serious money is made either in stocks or in property. While latter requires huge investments which cannot be made available often, the former has its own dark alleys and potholes not easy to negotiate by most of us. Mutual funds (MF) are the best via media where experts invest and monitor your money in stocks and/or safer debt based avenues as per your choice and inclination.

Route you should take

If it is to be stock markets, what would be a dream thing to happen to your investments? Would it not be to get a big chunk of best shares when their rates are low and relatively smaller chunk when their rates are high? Ideal – that’s the way Gurus say it should be!! Investing in Mutual Funds has one such ideal method which we strongly advocate. It is called SIP (Systematic Investment Plan), which is offered by all the Asset Management Companies (AMC, like Reliance, Birla, SBI, ICICI etc) in all their prominent schemes.

Only caution – SIP works best in long term. Commit a small sum, say even just Rs 1000/- per fund, which you can put in each month comfortably; go for long term like 3, 5, 10 or even 20 years; take a few SIP funds distributing them as per various categories of investments; make them automatic debit from your bank account so as to achieve consistent investment and just regularly monitor their performance. Irrespective of market movement, you will create wealth for yourself over a period of time much faster than through any other medium. Another caution – do not be overly bothered about NAV (Net Asset Value) – a scheme may have high NAV simply because it is a good scheme! Some people confuse MF NAV to be the same as the price of a stock. While in stocks, the price is important, in MFs, it is the percentage return that is the performance criterion – -hence a high or a low NAV is inconsequential. Hence, do not look to invest in the cheapest funds – what you may get may be a cheap quality investment. In the end, what matters to you are the percentage returns you get – irrespective of the NAV being high or low.An ideal SIP portfolio would comprise of about 5-7 MFs where one can be a tax saver (if you need it; it comes with compulsory lock-in period of 3 years but also tax saving under IT Section 80C), one can be a Large Cap fund and the balance three can be equity related with debt proportion in a ratio you would be comfortable with. Depending on the Gold outlook, a Gold Savings Fund can also be included.

Are MFs Good only for Stock Investing?

It may come as a surprise to you that most of the money (generally 70% or so) invested in MFs in Indian market today is actually in safer, debt funds. Most of the funds do not have any exposure to equity markets and invest only in Government securities, bank instruments and safe corporate Certificates of Deposit & Commercial Papers. Compared to Bank FDs and other safe investments being done by retail investors like us directly, such debt-related MFs usually give higher returns and are more tax-efficient, thus further increasing the net returns available to you. They are a much better alternative than you directly investing in the FDs and other safe securities yourself since professional fund managers with years of experience in debt investing are constantly on the look-out for good debt investing opportunities as per the returns and safety mandate given to them. Also, a debt MF scheme invests in a large number of investment avenues. Your money thus gets a well-diversified exposure bringing down the investment risks many notches down.

Debt funds have a fairly wide range of schemes offering something for all types of investors. Liquid fund, Liquid plus funds, Short term income funds, GILT funds, income funds and hybrid funds are some of the more popular categories. For long term investors, debt income funds provide the best opportunity to gain from interest rate movements. There is also the short term plans for investors looking to invest for periods of 1-2 years. Liquid funds can be used for very short term surpluses, as a better alternative to surplus money lying in savings bank account. Fixed maturity plans (FMPs) have been gaining in popularity lately as they minimize the interest rate risk and offer reasonable returns to debt investors. Those emphasizing shorter term securities and higher credit quality tend to be more conservative than ones offering longer maturities and lower credit quality. More conservative funds generally hold out the prospect of reasonable returns and low risk exposure, while aggressive funds seek to offer higher returns in return for accepting higher risk exposure. As the relative risk profile of such securities is higher, investors in such bonds expect higher income streams compared to higher-rated bonds.

Having seen the safety aspect of Debt MFs to be similar to bank FDs, let us go back to the question – how are they better than bank FDs. It is so due to their lower taxation rates as also indexation benefits; latter – if held for a period longer than one year. In case of Debt MFs, if the fund is held for less than a year, then its taxation on the interest (called Capital Gain in case of MFs) will be the same as a bank FD though rate of interest earned may be slightly higher along with the attendant advantage of the flexibility to take out your money any time. If the fund is held for a period longer than one year, the maximum tax rate applicable on the Capital Gain will be 10% if no indexation benefits are taken. If indexation is applied, it is 20% but your tax is reduced depending on the rate of inflation in the economy and there is likelihood that you may pay no tax at all! Let’s see how does it work?

In indexation, the cost of investment is raised to account for inflation for the period the investment is held, if the period of investment is anything more than One year. This is done by using a cost inflation index number released by the tax authorities every year. For instance, take an investor who bought debt fund units worth Rs 50,000 at Rs 10 per unit in March 2008. He then sold off all the units in April 2009 (after 13 months) at Rs 11.02, getting a return of 9.5% per year. Since the units were held for more than 12 months, it is termed as ‘long-term’ and benefits of indexation can be taken. The base year for the cost inflation index number is 2007-08 (as the units were bought in March 2008), and the index number was 551. The year of sale is 2009-10 (as the units were sold in April 2009), the index number was 632. The notional cost for acquisition of the units for the purpose of tax calculation will therefore be increased to Rs 57,350 (50000*632/551). The sale price is Rs 55,100 (=5000 X 11.02). Since the notional cost price (as increased by rate of inflation) is more than the sale price, there is no gain and hence, no tax! Thus, even though investor has made a good gain, the cost inflation working (indexation) has wiped it out notionally. Had this investment been made in a Bank FD at same rate of interest and the investor was in 30% tax bracket, he would have paid a tax of Rs 17,026 on the gain. This phenomenon has happened due to high inflation – even if the inflation were low, the tax paid would be much lower than for a similar Bank or Company FD.

Get our Newsletter to get best money ideas right in your mailbox.

Hum Fauji Financial Services is on a mission to defend the wealth of armed forces personnel. 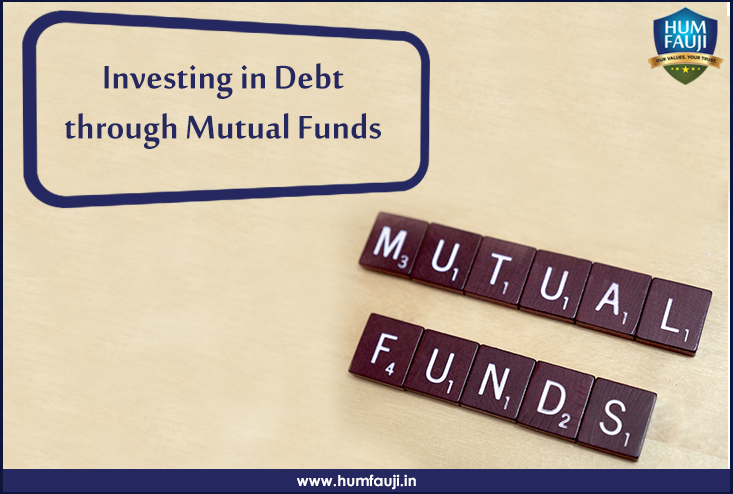