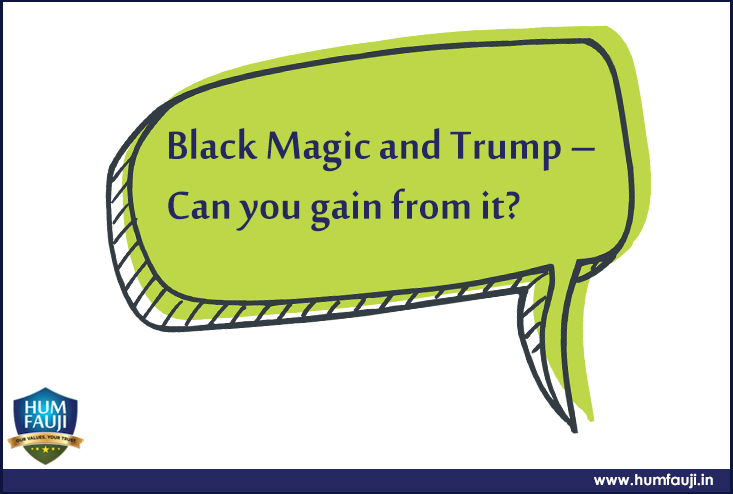 The ‘Black Money’ eradication ‘magic’ by the Modi Govt and trumping of US electorate by Donald Trump – both economy changing events took place less than 24 hours apart. While there is enough going around on whatsapp, facebook, SMSs and emails to explain what has happened, credible analysis to give you a financial take on them is quite in short supply. We give you here our short analysis of the two events and how you can gain from them.

What’s so great about Trump becoming US President

Donald Trump’s victory as US President was built up by almost everybody as a doomsday scenario. And the doomsday has arrived now! So what do we expect now?

Trump has been a businessman and a successful one at that. It goes without saying that his understanding of economics would be much better than his predecessors. On top of that, the US Congress and Senate are now both controlled by Republicans. This will actually help push Trump’s growth agenda which, as outlined so far, has been tax cuts, infrastructure investments and focus on manufacturing,which should be positive for the US Economy. It will be inflationary in the long term and could mean a sharper increase in interest rates, which may pull out some FII investments from India. However, the fact still remains that it is too early to assess the economic impact of this election. The power is disseminated between the President and the Congress and we must not underestimate the political importance ofcongressional Republicans. They will certainly try to amend or mitigate part of Trump’s proposals.

Although Trump wants to put stricter immigration rules, he also says he wants to woo Indian entrepreneurs and students to the US. Trump’s hard stance on terrorism could also result into deeper Indo-US defence and strategic ties.

If there is anyone Trump has lambasted more than Clinton during his campaign, it is China. He has threatened to label China as a currency manipulator. Given India’s strong pharma manufacturing, Trump’s promise to curtail China could open possibilities of diverting and capturing a part of the trade that China would lose.Trump has promised to unleash America’s shale oil, natural gas and coal reserves to make U.S energy self-sufficient. He has also promised to open onshore and offshore leasing on federal lands and lift the moratorium on coal leasing.If Trump were to come true on his promises, India could benefit massively. Opening up of the US oil sector could lead to oil price stability globally which would immensely benefit India economically.

What negatives (like IT outsourcing) can take place due to this change of Presidency are all well known and do not need to be given out in this communication.

What does your depleted Wallet tell you?

PM Modi did a local monetary surgical strike on 8th Nov 2016. In fact it had been building up for quite some time but none of us noticed it – it started with amnesty for foreign stash, followed by that for Indian stash(VDIS – Voluntary Disclosure of Income Scheme). When nothing much came of it, the monetary surgical strike followed. While how you can get back in monetary terms what you have in your wallet, your wife’s hoarded cash and your daughter’s piggy bank is well given out in very many messages floating around, let’s see how it affects your investments, long-term goals and financial survival.

India has very high interest rates, which affect all aspects of your loans – home loan, credit card roll-overs, vehicle loans etc. In India, low rates are 7% while in developed world, high rates are anything above 2.5%! India has about Rs 100 Lakh Crores in banks while about Rs 17 Lakh Crores is parallel black economy –ie about 17% of the country’s banking system. A large part of this coming back to white economy means a huge infusion of liquidity in the system. This would bring down the interest rates in the next few months.

Decrease of interest rates would benefit infrastructure sector as also all aspects of economy that use credit to operate. The road, rail, construction, banking and loaning industries will benefit immensely and this also has the potential to generate huge employment as the currently stuck infrastructure projects take off due to cheaper money available. Remember that the Govt gets a lion’s share of this black money in terms of tax that people would pay for the conversion to ‘White’ as also the amount of domestic liability of the Govt that gets extinguished if the Rs 500 and 1000 bills are allowed to expire by the ‘black money’ hoarders – you must have seen the ‘I promise to pay the holder…..’ line on currency notes which indicates the domestic liability of the Govt to the holder of the currency note.

Thus the positive aspects of ‘Demonetisation’ can be summarised as – likely to halt terror funding temporarily; current flow of black money comes down drastically; Increase in the liquidity of the banking system and thus good money available for lending, though it will have a short term dampening effect on lending and call money rates; as the overall liability of Govt come down by the amount of black money that does not flow back into the system, an equivalent amount of currency can be printed and used for productive purposes like infrastructure development.

And the negative aspects of the decision – nothing happens to corporate sectorwhich is the biggest generator of black money in India through under- and over- invoicing which is used to fund the election campaigns of the political parties; without proper bank accounts and due to lack of banking and ATM facilities in far-flung and rural areas, the small-income people and small businesses may face immediate difficulties related to transactions and exchange of their currency notes; the holders of black money can still get them exchanged with penalty after certain limit and invest it in bullion and real estate, resulting in approx 40% of their black money becoming white forever. Of course, the root causes of generation of black money still does not get addressed.

And Our final Analysis!

We expect short term volatilities in the equity markets, largely due to demonetisation of Indian currency, rather than due to Trumping of USA.

In the long term of 3-4 years, we expect equity markets to be an outperformer, starting from now. Those with patience and willingness to weather short term volatilities now and in between are likely to reap very good rewards.

Fixed Income markets are likely to have a very good time ahead and the time to invest has already started! We see interest rates going down more and faster than visualised earlier. Hence, debt products should be got into at the earliest. Tradeable debt instruments like Debt Mutual Funds will be better than FDs due to the former having potential for capital gains as also the interest gains.

Physical markets (Real Estate and Gold) which were being fed by the parallel cash economy will take a hit and are likely to remain subdued for a long time. While Gold may have short term revivals, we do not see it as a storehouse of long-term wealth, at least as on today. Similarly, residential real estate seems to be a long way off from revival while commercial real estate may revive in selected pockets as business activity picks up.

You have a great opportunity to buy equities now, if you are comfortable with equity as a class. Get into a good portfolio of equity mutual funds for the long term. If you already have one, increase your SIPs – your 7th CPC increment of pay should all get in here.

Due to anticipated decrease of interest rates at a fast pace now onwards, fixed income space has become very attractive. Rather than bank/Company FDs, Debt Mutual Funds present a very good opportunity now. In the latter, apart from good safety of capital, you get better returns due to the added capital gains component and the tax-efficiency. In case you are looking for safety, good tax-efficient returns, and facility for monthly investments too, this should be your choice of instrument. Those with good bulk money available, like the recent retirees, 7th CPC arrears holders or holding bulk money due to having sold an asset, should invest in Debt MFs without any delay.