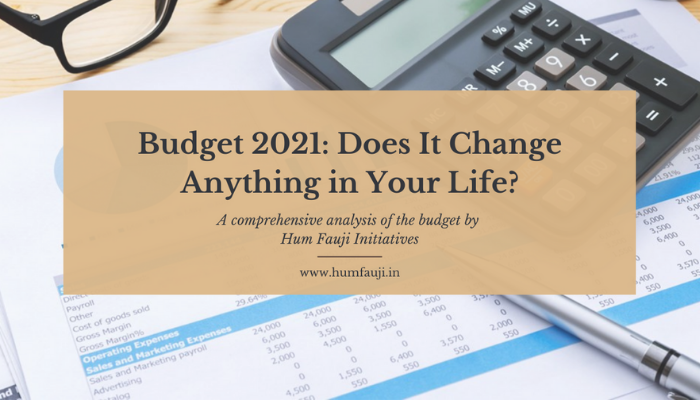 Firstly, our overall take on the budget 2021

This is definitely a good budget – focused on the short-term growth in the right areas without any disruptive taxation in these extraordinary times. One of the best budgets ever seen and could have been expected in current scenario. Execution of the same becomes critical now.

The biggest positive is that there are no negatives like taxes on the ultra-rich, no Covid cess or any tinkering with long term capital gains tax. So, we got a budget with no bad news, creating ease of doing business and a focus on growth.

The budget rightly strikes a reasonable balance between addressing the key pillars of Health & Well-being, Inclusive Development, Human Capital, Innovation and R&D, apart from laying the path for a robust economy by providing a major infrastructure boost. The array of measures announced are in line with people’s as well as market’s expectations and will go a long way to bring the nation back on track by boosting spending on infrastructure and rural development while fighting the pandemic through health focused measures.

Here are the highlights of the Union Budget 2021 as it pertains to you:

2. Unit Linked Insurance Plans (ULIPs) get taxed: Income from maturity of ULIP policies will now attract capital gain taxation which was fully exempt earlier if your annual premium did not exceed 10% of the sum assured. This makes such high value investments less attractive for the taxpayers as they now have to pay capital gains tax on maturity. This is applicable for all ULIP policies bought from 1st Feb 2021 onwards. The advantage that ULIPs had over equity mutual funds (MFs) will also no longer be there as this provision has brought the gains made from ULIPs with premium over Rs 2.5 lakh at par with equity mutual funds.

3. No tax change: The government has left direct taxes unchanged, but took steps in direct tax incentives to ease compliance for taxpayers. The Finance minister proposed making it so that advance tax liability on dividend income shall arise only after payment of dividend. The Budget also looked at pre-filled tax forms with respect to details like salary income, tax payment and TDS.

5. Fuel and Liquor cess: Agri Infrastructure and Development Cess on a number of items including fuel and liquor was announced today but the finance minister also said there would be no additional burden on the consumer overall. Budget imposed a Rs 2.5 per litre agri infra cess on petrol, Rs 4 on diesel, and of 100% on alcoholic beverages.

7. LIC IPO: The finance minister announced plans to privatise 2 PSU banks and one general insurance company in FY22. The Govt will bring the long-awaited LIC IPO in FY22, adding that it plans to complete the divestments of BPCL, CONCOR and SCI in 2021-22.

Some other Important Announcements

1. Access to deposits: The finance minister announced that in case a bank fails or withdrawals from the bank are stopped due to financial pressure on the bank, the depositors will be able to get immediate access to their deposits up to the deposit insurance amount of Rs 5 lakh.

3. A Bank for roads: The Govt is set to introduce a Development Financial Institution (DFI). Rs 20,000 crore will be provided to capitalise the new DFI, with an aim to have a lending portfolio of Rs 5 lakh crore in 3 years. National Monetisation Pipeline for brownfield projects will be launched, the FM announced with NHAI and PGCIL having sponsored one Infrastructure Investment Trust each. She also added that vehicles will undergo fitness tests after 20 years for PVs, 15 years for CVs, announcing a voluntary vehicle scrapping policy.

6. Shot in the arm for healthcare: The allocation to healthcare in this budget has been increased substantially to Rs. 64,180 crores. The areas of focus will be preventive and curative healthcare as well as wellbeing, she said. The allocation is likely to be around Rs 2,23,846 crore, a 137% percentage rise from the previous budget. Rs 35,000 cr has been budgeted for COVID-19 vaccination expenditure in FY22.

Other provisions that may be of interest to some select few:

With Best Wishes for a Financially Abundant 2021.