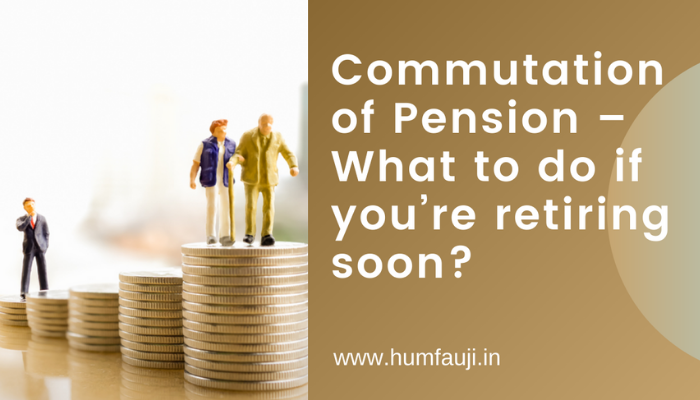 “Sir, Can I speak to you regarding my retirement planning as I’m retiring six months from now?”
“Yes please. We can talk right now.”
“Sir, Can I know whether to commute my pension or not, and if yes, how much?”

This is how my typical conversation with somebody who’s retiring goes. Somewhere, the most urgent issue confronting a retiring armed forces officers now seems to be commutation!

In fact, I’m a big culprit myself contributing to this – commutation was a non-issue many years back and nobody used to talk much about it except those who used to look at their retiring papers made by the office clerk too closely. About 5 years back, I wrote an article on commutation of pension and all the hell broke loose. Commutation of pension became a serially trending subject with those nearing retirement. So much so that I was asked this very question by a Major rank officer while giving a financial planning lecture at DSSC, Wellington!

I have written on this subject a few times in the past (available on our blog at https://humfauji.in/blog/) but circumstances change and hence a revisit to the subject is required.

Before anything, let’s see a few facts about commutation of pension

Are there any advantages of commutation of pension?

Please remember that, post-commutation, the take home pension will reduce to the extent of the commutation done. However, our experience of talking to a large number of retired officers is that, for a husband and wife living in their own house in a metro city like Delhi, the regular monthly expenses, including everything, is about Rs 60-70,000 per month. Of course, this does not include EMI payments of loans, any house rent payable etc.

Now to the most important question – should you commute or not commute?

Anybody who reads the previous section would be tempted to commute, and commute to the maximum. This is so because it only conveys the mathematical side of commutation of pension. But life is much more than mere calculations.

My take on life-cases who should commute and how much, based more on living life to the best while fulfilling parental and other responsibilities is as follows:-

I hope I have been able to cover most of the scenarios that officers face and there is some amount of clarity. In case of any further queries, please put your queries on https://humfauji.in/contact-us/ and we’ll revert to you.

Just a couple of more things I would like to convey:-