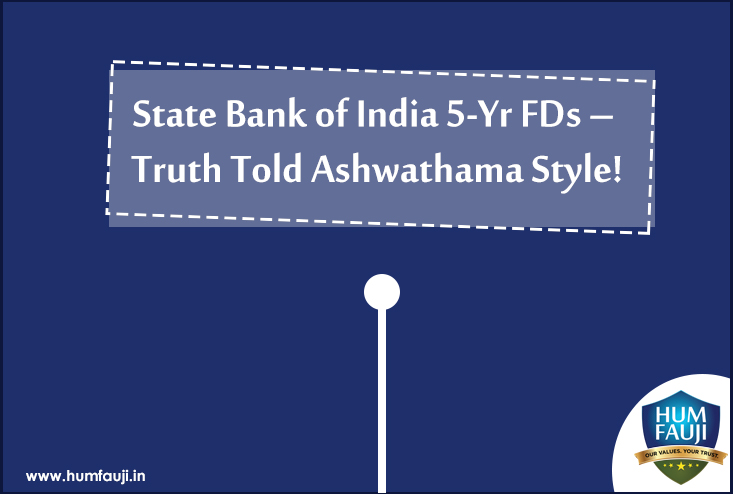 Take a 5-year Bank Fixed Deposit (FD) in the largest bank in India and get interest upto 18.55% per annum. Too good to be true – State Bank of India says so! The offering is:-

Is it true? Can an almost risk-free investment give you 17.77% return?

If so, why does anybody need to invest into anything else ever….?

We have heard of people who have put in substantial amount of their money in such FDs, taking the contents of the advertisement to be the whole truth.

Actually, State Bank of India’s advertisement is Truth – Ashwathama style! What it does not reveal to you is the following:-

If the above two conditions apply to you, then, with SBI paying you 9.25% interest, your post-tax returns after 5 years would actually amount to a mere 6.96% per annum only and not the fancy 17.77% being advertised by SBI!! Also remember that in this type of tax-saving FDs, there is no facility of premature withdrawal, even with penalty.
In fact, there are much better ways to save tax under IT Sec 80C, like Provident Fund, Equity Linked Savings Schemes of Mutual Funds etc, than these FDs, notwithstanding the slick advertising.

Moral of the Story:   It is YOUR hard-earned money. Consider all the possible angles or consult an unbiased Financial Advisor before you make any major financial investments. Look before you leap is the mantra!