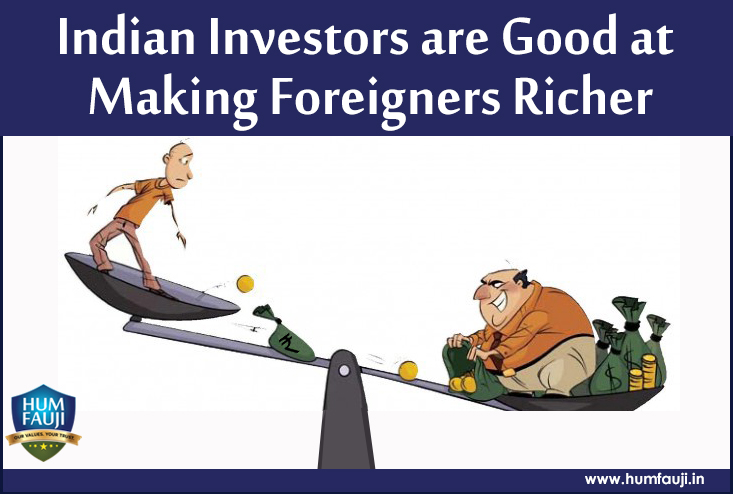 We all know the popular adage about putting one’s money where the mouth is. My experience of talking to investors and advisors in the last 6 months has taught me that we also need to put our money where our vote is!!! And by vote I don’t mean your or my individual vote – we needed to put money where our collective vote could have been!

This morning a leading national daily screams “FII inflows hit USD 5.7 bn (Rs 34,000 crs) in May” and then I see another financial daily, today as well, screaming “(Indian) Households puts two thirds of their savings in houses & gold”. Ouch!!!

Put Your Money Where Your Vote Is

Over the last 6 months we saw a lot of messaging on social media platforms like twitter and facebook about “achche din aane wale hai” in anticipation of a likely political change. There was a widespread feeling of dissatisfaction with the incumbent regime; talks of frustration with policy paralysis and resultant sluggishness in economic performance. Somewhere in September, the popular Chief Minister of Gujarat, Mr. Narendra Modi, was announced as Prime Ministerial candidate of the BJP and it was followed up with a 4 out of 5 states’ victory in state elections held in November 2013.

Sequence of events thus led to a belief, widespread again, that an industry and economy friendly (and hence market friendly) BJP had great prospects of forming a Government at the center under Mr. Modi’s leadership. The country showed a certain movement in belief and as we all know now the country voted in favour of a clear majority government after a gap of 30 years!

Now let’s look at what I mean by putting the money where the vote is. It is “we” the people who contributed to the “achche din aane wale hain” phenomenon by voting in large numbers in record turnouts. The “achche din” is yet to come but stock markets are forward looking in nature and in anticipation of the “achche din” the Nifty has already moved up 8% in May 2014 and nearly 15% since 2014 began.

But Who is Benefiting from Our Votes

But who do you think has benefited by our newfound electoral activism. And who will benefit? Unfortunately, doesn’t look like it is going to be “we” the people who engineered this.

FIIs invested Rs 34,000 crores in May alone on the back of Rs 32,000 crores already invested from Jan to April 2014. FIIs invested over Rs 1 lakh crores each in calendar years 2012 and 2013 and their total inflow (not today’s value) into India is already over USD 150 bn or Rs 9 lakh crores cumulatively since 1991. Indian Equity market has been the best performing large market globally in 2014 and also in last 10 years and it now figures in the top 10 markets by market capitalization.

While FIIs have invested the numbers stated above, in the last 5 years, domestic institutions including mutual funds have sold equities consistently on the back of outflows from Indian investors. Domestic holding of Indian equity has been on a rapid decline. For instance in FY2014, Indian equity mutual funds witnessed an outflows over Rs 10,000 crores as opposed to over Rs 1 lakh crores buying from FIIs. And this has been the trend for the most part of last 5 years.

Who Contributes to Indian Companies Profits

I know that we Indians are very proud of our country and its economic prowess. Question is: Is it good enough to be just proud or should we also benefit from it?

Let me explain with couple of examples. In the last 20 years we have seen the rise of private sector banks in India, one of the most visible signs of India’s growth and economic liberalization is the new and improved banking sector. Let’s take HDFC Bank. What do we gain when such a well regarded bank grows and we can see them spread around us easily accessible everywhere?

HDFC Bank employ a lot of our youngsters giving them better standard of living and hence ability to consume and contribute to growth; we all can avail of home loans and car loans so we own potentially bigger houses and drive bigger cars. We get access to banking facilities like internet banking which enables us to buy online and pay bills faster. So we contribute to the growth but who participates in this growth? The shareholders! Isn’t it logical for consumers to want to be shareholders? Likely consumers as shareholders is generally reflected in the “non-promoter non-institutional” holding of shares of a company.

So what is this number for a widely “consumed” banking service like HDFC Bank? The number stands at about 16% of market cap as on March 31, 2014. It has fallen from 24.5% on March 31, 2008. Another about 10% we hold through our insurance and mutual fund subscriptions so the total is about 26%. And what about foreigners? They own 51% of the bank through FII holdings and issue of depository receipts (ADR/GDR holdings). So we contribute to about 100% of the consumption of their services but only participate 26% in their profits. More than half of our contribution goes towards enriching foreigners from India’s growth.

Let’s take another example – that of Hindustan Unilever Ltd. We love buying their soaps, shampoos, biscuits, ice creams, washing powders et al. We contribute 100% to the consumption of their products, but how much do we participate in their profits? Hold your breath – its 14.5% and another 4% that we hold through our insurance and mutual fund subscriptions. So here’s another example of us contributing to 100% of the consumption and growth but participating in only a meager 18.5% of the profits.

We are the Darling of Foreign Investors

Out of the entire market capitalization of the top 200 companies of India as represented by BSE 200 index, promoters own 57% and FIIs own over 21% as on March 31, 2014. We Indians – directly plus our investment in insurance and mutual funds hold just about 20%. If export oriented or international business income of these companies for a moment is assumed to be 20% of total earnings, we can say that we contribute 80% of the consumption but we participate in only 20% of the profits.

We are the darling of foreign investors – I hope you now understand why. We are very good at contributing but very bad at participating!!! We are very proud of India’s growth, we love to enrich others from India’s growth but we do not want to be rich ourselves.

About 300 years back, the East India Company came to India and forcibly took over a lot of our business. That was not fair on us but at least we have the luxury of blaming them for setting us back. But this time around who are we going to blame? Any guesses?

Let me end by telling you Equity investing has always been presented as an instrument to make larger return. The juncture where we find ourselves today, it appears to be an instrument of expressing patriotism and participating in India’s growth. Else let’s stop singing those “achche din aane wale hain” slogans because “achche din” are just going to pass us by!!!