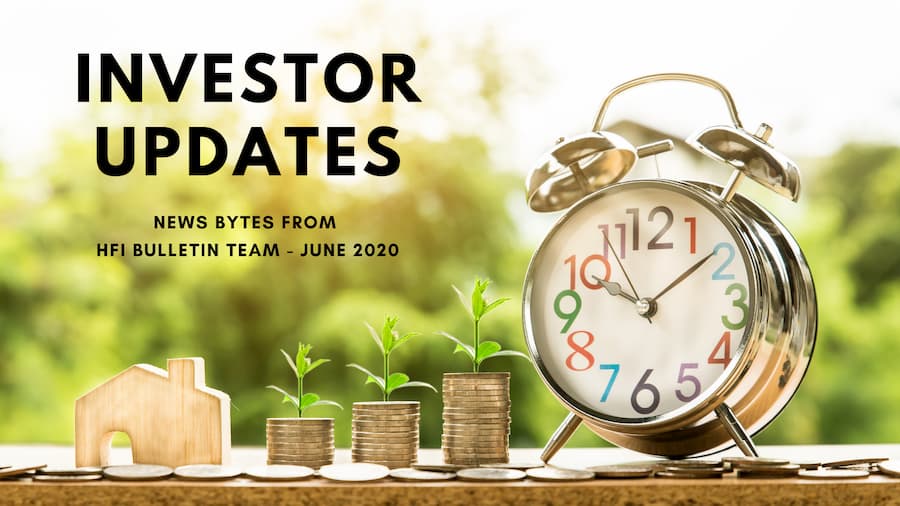 Silver prices are up about 25% in a month, Silver has strongly outperformed gold over the past month. Silver rates have been lifted on optimism that industrial demand of the metal may revive as countries reopen their economies. Silver rates surged in Indian markets today, extending their recent gains.

LIC may cut back on investing in stocks as new premium growth stalls. Official figures suggest that a cut back in equity allocation by Rs 10,000 could be the lowest in a decade. LIC invested around Rs 47,000 crore in equities in FY20, down 21% from the amount it invested in FY19.

Mutual Funds are looking at launching low volatility products- Equity as well as Hybrid, to give investors alternatives in the current market environment. ICICI mutual fund recently filed for an exchange traded fund (ETF) that will track the Nifty alpha low-volatility 30 index. It is part of a suite of smart beta indices with NSE, with the portfolio designed using a combination of two factors. 50% of the index portfolio is oriented towards low volatility stocks on the nifty, and rest is oriented towards the alpha component. Actively managed funds charge a higher fee because the manager invests time and resources in identifying winning stocks, whereas passive stocks just mimic the return of their underlying indices. Funds based on smart beta indices offer a middle path to investors. A smart beta strategy focusing on quality, will allocate more to companies with higher earnings growth, stable cash flows and low debt. A low volatility ETF’s portfolio will comprise companies with more stability in earnings and stocks with low volatility in price. Smart beta funds can potentially offer better risk adjusted return than a traditional index fund.

Wealthy Investors and Corporates are turning to additional tier-1(AT-1) bonds of large banks in search of higher yields in a declining interest rate environment. AT-1 Bonds pay a slightly higher rate of interest compared to similar, non-perpetual bonds. Banks have the right but not the obligation to pay back the principal amount after exercising a call option. AT-1 bonds had fallen out of favour after the Yes Bank fiasco in March 20. However, higher yield with decline in interest rate in other debt instruments has prompted investors to look at these bonds again. Yields on these bonds are higher than that given by non-convertible debentures and bank fixed deposits.

The severe dips in revenue during the lockdown has doubled the state government borrowings to over Rs 1.26 trillion from April to early June . The governments had to increasingly resort to borrowings to meet the funding exigencies, owing to severe revenue shortfall caused by the shutdown. Government borrows through issue of government securities, as the tax and non-tax revenue fall short in financing government spending programme. The decision to stick to its borrowing programme will largely keep the bond yields in check but this will increase the fiscal deficit with increase in interest obligation as public debt will go up leading to higher debt to GDP ratio.

Mukesh Ambani announced that his oil-to-telecom conglomerate RIL is now net debt free after raising Rs.1.69 lakh crore in last two months from global investments and right issues. Ambani says, “I have fulfilled my promise to the shareholders by making Reliance net debt free much before our scheduled date 31st March, 2021”. In the last 9 weeks RIL finalized 11 deals which include Facebook, Silver Lake, Vista Equity Partners, General Atlantic, KKR, Mubadala, ADIA, TPG, L Catterton, PIF, and Saudi Arabia’s Sovereign Fund. It has raised a total of Rs 1,15,693.95 crore from these global investors. And another 53,124 crores from rights issue in last 58 days. In an Annual General Meeting, on August 12, 2019, Ambani announced a roadmap to make Reliance a net debt free company by March 31, 2021.

RBI has imposed strict rules on Housing Finance Companies in order to prevent conflict of interest. RBI said that, either the HFCs can take exposure to group companies in real estate business or lend to retail individual home buyers in project of group entities, but cannot do both. RBI said in a draft regulation that “This is aimed at addressing the concern on double financing due to lending to construction companies in a group and also to individuals purchasing flats from the latter”. RBI further said that, HFC’s exposure (lending & Investment ) cannot be more than 15% of owned fund in a single entity in the group and 25% of owned funds in all such group entities. The RBI which directly regulates housing finance companies since August last year, suggested clarity in HFCs’ principal business, to make a half of their net asset in housing finance and proposed of loans to developers for construction of residential units, schools etc under home loans.