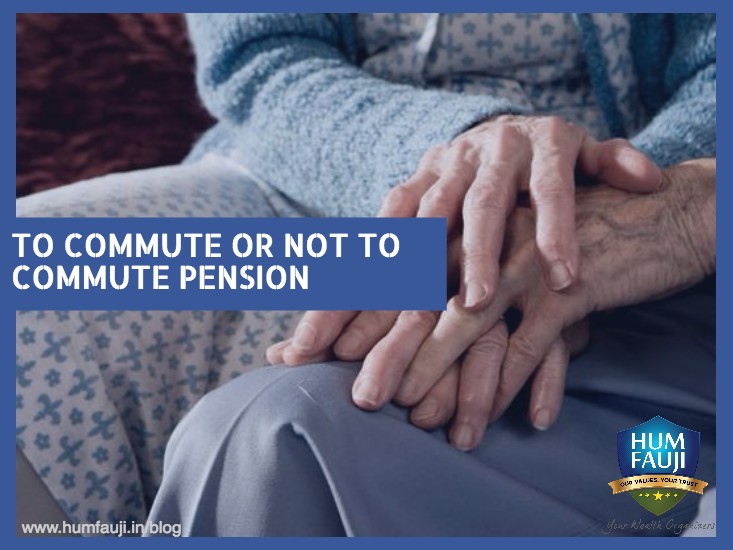 Whenever any retiring officer approaches us for advice, invariably the question of whether or not to commute the pension comes up. This article deals with this issue so that all officers, retired or retiring, would be able to make up their mind more knowledgeably.

Before we take a call on the same, a few connected issues need to be understood clearly:-

If he does not commute the pension:-

If he commutes the pension:

Analysis of Commutation Vs Non-commutation:

If you see the calculations above, the difference between commuted and non-commuted monthly pension is about Rs 18,680, which is not much of an additional amount to be received every month. And, he also gets a big sum of Rs 19.9 Lakhs in bulk. He would be able to generate long term returns of anything from 6% – 12% per annum net of tax, depending on where he invests his commuted amount. If he takes up re-employment or corporate job after retirement, for a few years, this small additional monthly amount will anyway not matter much to him. Thus, commutation seems better than on-commutation due to following three reasons:-

It is assumed that the 7th pay commission will increase his serving basic pay by 20%. Thus his serving Basic Pay will be Rs 89,640 and hence, Pension Basic Rs 44,820.

Again, even after pay commission effect, the gap between maximum commuted and non-commuted pension is only Rs 22,410 while the officer gets Rs 23.88 Lakhs as bulk if he commutes by 50%.

We strongly recommend that all officers should commute their pension to the maximum allowed 50%. If the officers are also able to invest their commuted pension bulk amount wisely and carefully, there is not likely to be any difference (or a minor difference) in their take-home pension even after commutation while still having this large commuted amount with them.