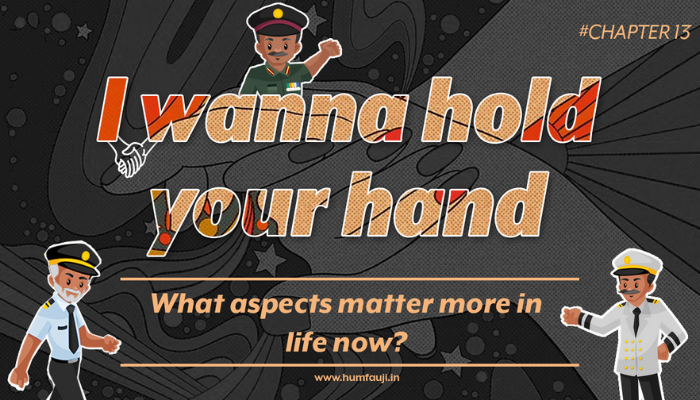 Chapter: 13 | I wanna hold your hand – What aspects matter more in life now?

The impact of the discussions over the past few weeks was not limited to the three of them now. The discourse had reached a different level, with AK and Rajesh discussing several of their mutual discussions threadbare with their spouses and children. Issues, with much larger ramifications than mere investing also came up, like, what kind of life to live from now onwards, what contributes to an enriching retired life, should you create more assets, how much to be gifted to children, etc. This led to detailed debates between the financially newly-educated parents and carefree youngsters in their respective families.

Some issues also became contentious between AK, Rajesh and their respective spouses. Pranav’s ideas on minimising investment in real estate and gold was not easily palatable to the other people AK and Rajesh would discuss them with. This led to the trio discussing these things internally online in their chat group through the day as well as in their morning golf meets. As the discussions had become more serious and personal in nature than the previous informative and educational discussions, golf had already taken a back stage.

Today, AK seemed tense. Pranav and Rajesh made fun of the fact that AK did not have any work now since he was on LPR (Leave Pending Retirement). AK instantly opened up that he was battling with some other thoughts for the past few days. He narrated a gist of his discussions at home regarding various issues, which Rajesh also corroborated as discussions in his own family.

“This is very personal AK,” Rajesh said, “Do you really want our suggestions on this?” AK indicated that he indeed wanted to know what his two closest friends thought about this.

Pranav being the Professor in the group, the other two looked intently at him. “Well,” Pranav began, “I might become a deadly villain for your families if you continue to take my advice! I know they must already be furious at me for all that I have put in your heads,” he laughed.

“Jokes aside, I feel what is more important right now for all three of us is to finalise what do we want out of our lives, after having worked relentlessly for about 3½ decades. The way I see it is, none of us knows how much time we have left, and more importantly, how much time we and our spouses have together in this world!”

Rajesh chipped in, “Pranav, I also think a lot about it now. See, if I take 85 years to be our normal life-time, leave out last 10 years as inactive years when body does not physically allow you to do much and your mindset and priorities also change, I have about 20 years from now. I also do not know who – out of I and my wife – will outlive the other. But whatever happens, the spouse left behind should not feel that we should have led a better life together and we’ve missed out on that.”

AK butted in, “Rajesh, you’ve raised very pertinent points. Sometimes I really wonder what is more important to me now – physical assets like real estate and gold which others say I should take but my money gets locked in there and they do no accretions to our lives, or, go in for financial assets like FDs, Senior Citizens Savings Schemes, Mutual Funds, etc where one can regularly take out small or even big amounts and lead a Golden Retired Life?”

“Exactly the point I have been making AK for the past many days. We have to decide on these broader aspects of life now. And I’m very clear that, unless we have these out of our way, we will forever remain confused,” Rajesh added.

“I’m so happy AK and Rajesh that we’re discussing this today as it is the most important part of our retirement planning. Once we settle on this, rest of the things will fall in place by themselves. A very important aspect related to what AK has said is, whether we should create further assets – another house or plot of land, more storeys to your existing house, move to a bigger house? I feel that we should not now do any of this now. Our asset creation phase of life was long over when we crossed 45-50 years of age. What is more important is that we make our lives more enriching now, live like there’s no tomorrow – the concept of Golden retirement which I’ve mentioned so many times earlier,” said Pranav.

“No doubts or questions on that Pranav. But then, another point that comes up is of our succession. My wife says that we should give a house each to our two children as also give some part of the retirement bulk amount to them. I have my doubts because I somehow don’t agree with it,” queries Rajesh.

“Rajesh I too agree with you. We have all given our children the best of education and facilities and made them capable of standing on their own feet. Let them fly now. You have done your responsibility – let them negotiate their way through the world and learn its practical ways now, rather than be pampered all through still and become unfit to face realities of life themselves when you are no more around. Giving them something as big as a house would definitely affect our lifestyles, and if you ask your own children truthfully, they would never want to do that. Moreover, how do you know your children want a house in that location? We give them a house in Delhi while they may work all their lives in Mumbai, Pune or Bangalore, or even outside the country! What a pain would we be inflicting on them in maintaining a house, getting paltry rental, while not even getting to stay in it for better part of their lives,” opined Pranav.

“I think giving them money instead, is better. But why give a big part of your retirement corpus to them just to save some small tax when you’re still alive and kicking? It will all anyway go to them only when you’re doodling in heaven!” butted in AK humourously.

“I think we have discussed an essential part of the whole retirement game today. Frankly, I feel so light after that, mind all made up on what I need to do going ahead. Lots of cobwebs have been removed.” Rajesh looked joyous after this conversation.

“Even I think we all have realised today that what matters from now onwards is how to have a happy and fulfilling life. If it comes from playing golf, be it so. Charity, doing another job, starting own venture, helping spouse in the kitchen, starting a school in our native village – whatever is done should contribute to a sense of fulfilment and happiness. And it depends on each one – each to his or her own,” concluded Pranav.

They all got up, ready to go, little realising that tomorrow they will all be guiding some younger officers on how to lead a good retired life!