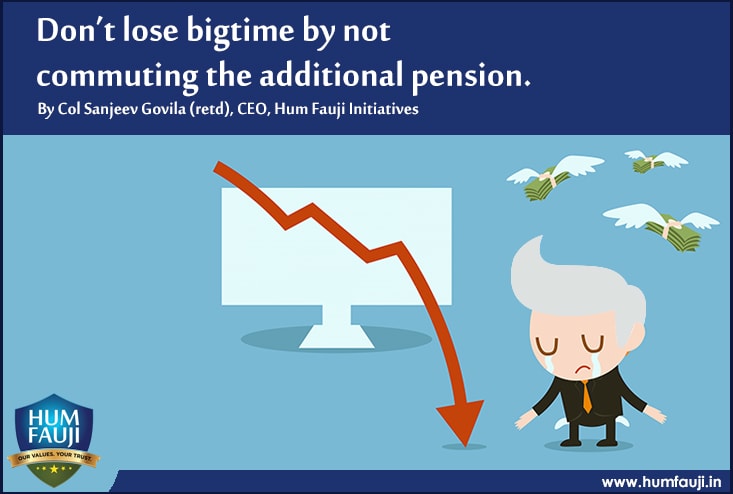 Rather than writing a lot of words, I have taken the indicative data of four officers of the ranks of Lt Gen, Maj Gen, Brig and Col, all of whom have superannuated on 1st Aug 2016 at their respective ages of 60, 58, 56 and 54 years of age and compared the effect of additional commutation Vs non-additional commutation. To keep the things simple, I have assumed that all of them have commuted 50% of their pensions earlier. Similalry, while calculating their tax liabilites, I have assumed that they will take full advantage of the Rs 1.5 Lakh exemption limit of IT Sec 80C. In case of officers having tax-free pension due to Diability or Gallantry Awards, the only small difference will be the tax part.

Details of Commutation and Pension as per 6th CPC

The Table 1 below gives out how the four officers of different ranks retiring on the same day and commuting 50% pension would be receiving their pension and would have received the commutation amount. If they have invested their commuted amount prudently, avoiding (or at least not committing much amount to) ‘apparently’ safe investments like bank FDs, PO MIS, Senior Citizen Savings Scheme (SCSS), Insurance etc, they would be patting their backs on their decision to commute their pension – whether goaded by my earlier articles on commutation or their own personal decision to do so. 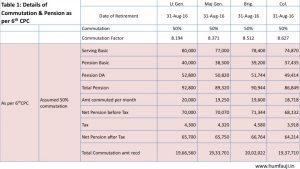 Table 2 below gives out the financials as per 7th CPC for the four ranks now and paints two scenarios – if you do not commute your pension any further beyond what you’ve already done (ie, 50%) under 6th CPC; Or if you decide to avail the option and further commute 50% of the increased basic pension as per 7th CPC. 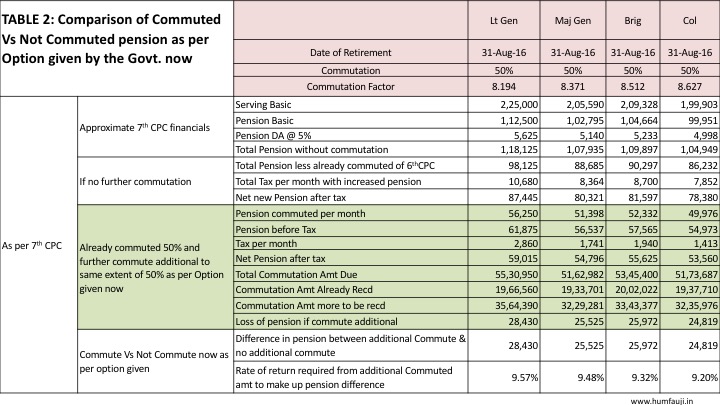 It can be noticed that the so-called shortfall amount can be easily made up if the amount received as additional commuted amount is invested in financial instruments which yield approximately 9.4% average per annum. On a long term basis, a mutual fund portfolio of 35% Equity & 65% Debt can achieve this average return. If an officer wants to be very safe and invest in a 100% safe Debt portfolio and one assumes a very comfortable 7% per annum returns from this portfolio of very high quality Debt Mutual Funds, the commuted amount received can be used to give out additional pension through the Systematic Withdrawal Plans (SWP) route. The advantage of using this mode would be:- 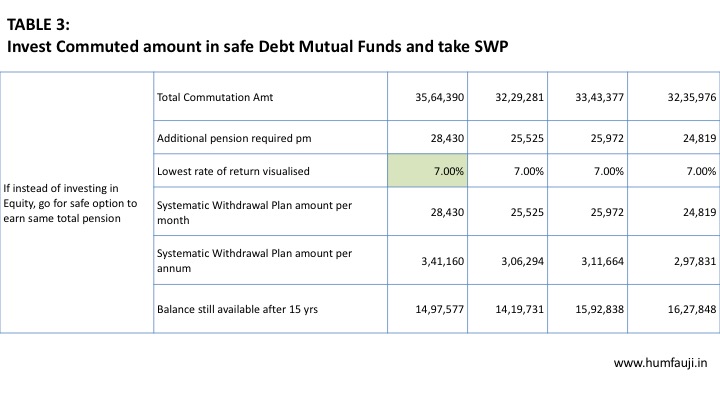 What should you do if you are retiring shortly?

While the above cases dealt with the additional commutation option that the Govt has given to the officers who have already retired on or after 1st Jan 2016, what should the officers retiring hereafter do? I sincerely believe that if the officer invests his retirement corpus well, including the commuted amount, there is no reason why maximum commutation option of 50% should not be taken by each and everybody. The Table 4 below depicts the same. If you are prepared to invest the retirement corpus in about 35% equity, you do not have to touch your commuted corpus and can earn the same pension as uncommuted option WHILE STILL HAVING YOUR ENTIRE COMMUTED CORPUS INTACT. And if you do not wish to go in for any equity at all, a full debt option, yielding 7% returns only, will also leave you with a large amount of money 15 years later. Thus obviously, non-commutation is only going to make you poorer! 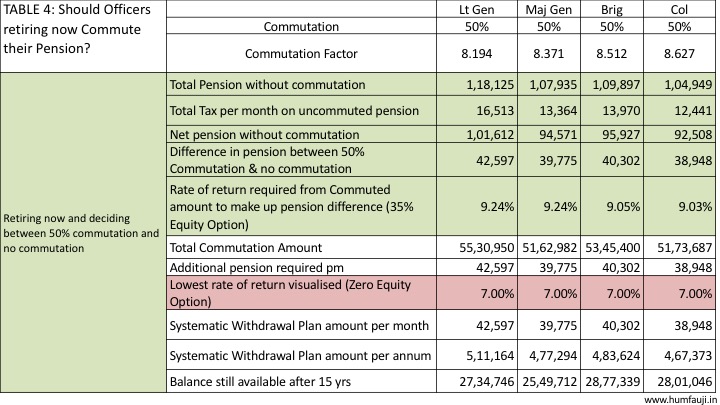 Why you should definitely commute your pension to the maximum extent allowed?

I summarise the benefits of commutation brought out in my two articles earlier below:-

If you wish to read our last article on Commutation, it is available here.