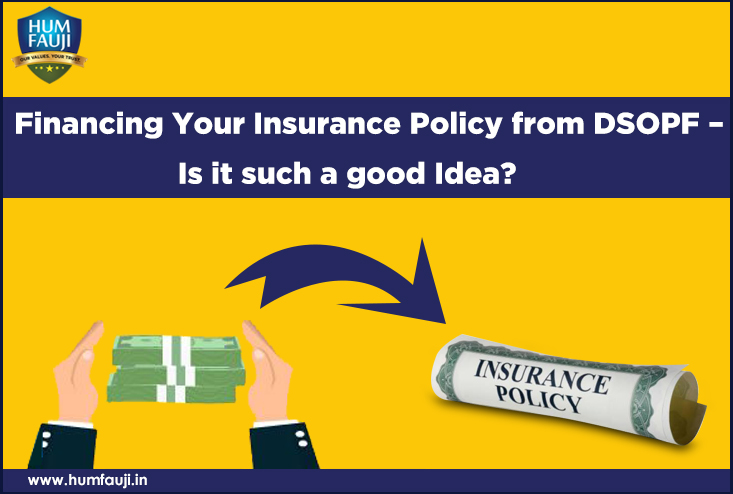 To an armed forces officer, Defence Services Officers’ Provident Fund (DSOPF) is a very precious resource. While the earlier perception was to contribute ‘as much as possible’ into it whenever possible, thankfully the perception is changing now. It is finding its rightful place in the portfolio as a pure debt component with full sovereign safety where one should contribute up to about 20-30% of the investible monthly surplus. However, as a financial planning firm, we have noticed an increasing tendency amongst the officers to finance their insurance policies through the DSOPF. While we will not discuss the need for those policies here which we have already discussed at so many other places, the officers probably overlook a large number of related issues when they agree to pay their insurance policies through the DSOPF.

DSOPF is a very flexible instrument which provides tax exemption under Income Tax Section 80C up to a maximum of Rs 1 Lakh. The rate of interest is also reasonable at 8.8% per annum, though it is bound to go down now since the general interest rates in the economy as such are headed southwards. Procedure for withdrawal from DSOPF is fairly simple and it acts as a good monetary source when big-ticket purchases are to be done. Any tendency for frequent withdrawals from DSOPF is looked down upon by the sanctioning authorities – this, along with a subtle peer pressure, ensures that the money accumulated in DSOPF is not frittered away on minor things.

However, this large corpus in DSOPF of officers unfortunately becomes a lucrative target for some elements. One such segment that has successfully targeted it has been the insurance industry. We come across cases regularly where large insurance policies of officers are being financed from DSOPF. This mis-selling has been most common in large cantonments and training institutes where large number of officers, especially young officers, is easily available to such agents. Is paying insurance policies from DSOPF such a good idea, let’s see:-

The DSOPF-financed insurance policy is generally sold by the agents, especially to the young officers, with a pet tagline that ‘you would not be financially burdened since it will go direct from the DSOPF’!! Remember, the 35% or so commission (if it is a traditional policy) of the insurance agent in the first year will be his, irrespective of where it is financed from.

In the end, we would only say that if you are convinced that you do need the insurance policy, at least do not get its financing routed through your precious resource of DSOPF. A direct financing by you would be more advantageous in the short as well as the long run.