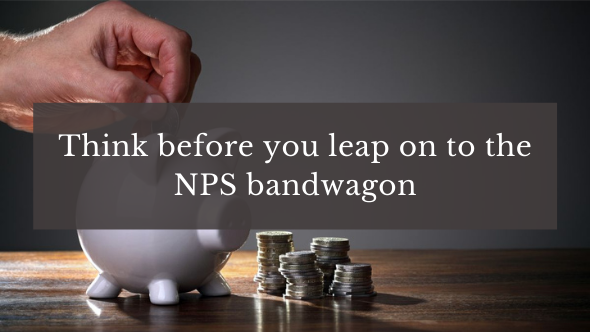 It is tax filing season again and the usual questions have started coming up to us. The most common, as you might have guessed it, is how to reduce tax outgo? It becomes all the more bothering to those who do not have a home loan to offset some taxes.

The charm of NPS

The deduction of Rs 50,000 translates to a tax saving of approximately Rs 15,600 for someone in a 31.2% (including cess) tax bracket. The savings that can get a decent smartphone for yourself or a family member is charming and makes many people think why they should not take a leap into the NPS? Savings of Rs 50,000 on one hand, a clean and decent tax saving on the other hand, and the pension from NPS at retirement appears to be the icing on this dream cake.

This is where we ask our fauji colleagues to pause and think!

Is NPS for you?

There are two variants of the NPS. One is for government employees (other than armed forces), and the other is for every other Indian citizen. The first variant is part of the employment benefits, but is not optional. The second is completely optional and individuals are free to subscribe to it if they want to.
For the first set described above, it works as a retirement planning tool since a sizeable corpus is saved every year, year on year, for over 30 years. For others, the size of the corpus may or may not become that big. In either case, retirement is on target when NPS is looked at.

Now think retirement and armed forces employment together. For those already eligible to get a government pension, the purpose is clearly defeated, as you would already be getting a fairly good pension. Moreover, this pension will be much more than what you would get from a meagre contribution of Rs 50,000 a year to NPS.

At this stage it is important that you look beyond the Rs 15,000 tax saving for now to understand the nuances. The NPS is still an evolving product. Tax rules change and you never know how long will the Rs 50,000 deduction continue, and in what form. But once you subscribe to NPS, then you have to compulsorily continue till the age of 60 (save some exigencies).

As on today, you can withdraw 60% of your NPS Corpus at retirement as a lump sum, tax free. However, you do not have the option to withdraw the remaining 40% like that. You are forced to buy an annuity plan. An annuity plan is given by an insurance company that will give you a periodic income from the invested amount. Remember, annuities are notorious for their low returns. Moreover, the amount you receive in the annuity pay-out is considered as income and will also be taxed as any other income. SO, low returns and full taxation is what you get through annuities.

Credit where due. The NPS has improved over the years. Earlier the tax-exempt lump sum withdrawal was just 40%, which was increased to 60% a couple of years back. Who knows, the government might get rid of the mandatory requirement of buying an annuity at retirement. But, maybe so.

This mandatory nature of the annuity is the biggest red flag as of now. It prevents you from choosing from the free market a product of your choice for your investments. At least for now, much better products do exist.

A well-executed investment plan through mutual funds to build that corpus and a well set up systematic withdrawal plan (SWP) from that corpus after retirement is certainly a much better option for now – nice way to build the corpus and very tax-efficient way to take the regular income.

So, for the time being, if you already have an assured decent pension, avoiding NPS is a better choice. On the other hand, if you do not have an assured pension, NPS might be beneficial. However, in this case, a meagre investment of Rs 50,000 a year will not add much value to your retirement goal of getting a pension from NPS.

In either case, you need to sit back, think and plan your steps clearly.