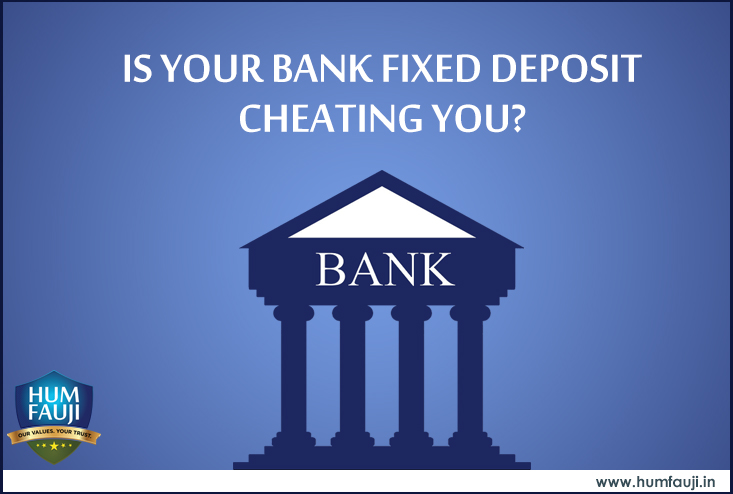 IS YOUR BANK FIXED DEPOSIT CHEATING YOU?

IS THERE AN ALTERNATIVE TO A BANK FD FOR SAFE INVESTMENTS?

Nobody likes to lose money. The most common refrain that I hear as a Financial Planner is – “I may not make much money, but I don’t want to lose any ever!” Why not – after all it is your hard-earned money, why lose even a bit of it? But then that person puts the very same money in a Fixed Deposit (generally of a bank, sometimes in a Company) for a few years, without realising that he has done exactly what he wanted to avoid!!

Let’s give it a closer look. Let’s say you have Rs 5 Lakhs which you want to invest in a safe place for 3 years. Let’s also say that your bank offers you a good 9.5% per annum (pa) rate of interest. You go ahead with the FD and expect the interest of Rs 1,42,500 three years later at 9.5% per year. But, when your FD matures, your bank deducts 10% TDS (Tax Deduction at Source) and when you file the Income Tax Return at the end of the Financial Year, the balance 20% tax also needs to be paid (assuming you are in 30% tax bracket). Thus, you actually get Rs 98,470 as the interest – amounting to just 6.56% per annum! Not only bank FDs, Post Office and Company FDs are also similarly treated tax-wise.

Can you do anything about it? If I were to tell you about an investment avenue which is almost as safe, gives you much better returns, is tax-efficient, may or may not have any lock-in period and you can keep adding or taking out money from it as you desire, what would you say? ‘Wow’! I am referring to debt Mutual Funds (MFs) here. You may be surprised. Aren’t MFs supposed to invest in stocks only? Not at all. In fact, out of a total of Rs 6.54 Lakh Crores invested in MFs in India today, approximately 70%, ie Rs 4.5 Lakh Crores or so is in Debt-based funds and only about Rs 2 Lakh Crores in Equity MFs!

The debt route in MFs

Debt mutual funds are like equity mutual funds. But instead of stocks, they invest in government bonds, corporate bonds, certificates of deposit generally of banks, commercial papers of companies and other fixed income instruments of varying maturities. They have lower risk than equity mutual funds; as a result they have lower returns too, but that is offset by the high safety that they provide to investors. Even though debt funds invest in fixed income instruments, the returns from debt funds are not fixed as in a bank FDs but vary as per the general interest rates prevalent in the economy. However, investing in debt funds like Income Funds which have longer maturity papers and the FMPs (Fixed Maturity Products) of long durations (1 to 3 years) give you interest rate protection over long periods.

Having seen the safety aspect of Debt MFs to be similar to bank FDs, let us go back to the original topic – how are they better than bank FDs. It is so due to their lower taxation rates as also indexation benefits; latter – if held for a period longer than one year. In case of Debt MFs, if the fund is held for less than a year, then its taxation on the interest (called Capital Gains in case of MFs) will be the same as a bank FD though rate of interest earned may be slightly higher along with the attendant advantage of the flexibility to take out your money any time. If the fund is held for a period longer than one year, the maximum tax rate applicable on the Capital Gain will be 10% if no indexation benefits are taken. If indexation is applied, it is 20% but your tax is reduced depending on the rate of inflation in the economy and there is likelihood that you may pay no tax at all! Let’s see how does it work?

In indexation, the cost of investment is raised to account for inflation for the period the investment is held, if the period of investment is anything more than One year.  This is done by using a cost inflation index number released by the tax authorities every year. For instance, take an investor who bought   debt fund units worth Rs 50,000 at Rs 10 per unit in March 2008. He then sold off all the units in April 2009 (after 13 months) at Rs 11.02, getting a return of 9.5% per year. Since the units were held for more than 12 months, it is termed as ‘long-term’. You have the choice of either paying tax at the rate of 10% or take the benefits of indexation, whichever is beneficial to you. Let’s see how indexation works. The base year for the cost inflation index number is 2007-08 (as the units were bought in March 2008), and the index number was 551. The year of sale is 2009-10 (as the units were sold in April 2009), the index number was 632. The notional cost for acquisition of the units for the purpose of tax calculation will therefore be increased to Rs 57,350 (50000*632/551). The sale price is Rs 55,100 (=5000 X 11.02). Since the notional cost price (as increased by rate of inflation) is more than the sale price, there is no gain and hence, no tax! Thus, even though investor has made a good gain, the cost inflation working (indexation) has wiped it out notionally. Had this investment been made in a Bank FD at same rate of interest and the investor was in 30% tax bracket, he would have paid a tax of Rs 17,026 on the gain. This phenomenon has happened due to high inflation – even if the inflation were low, the tax paid would be much lower than for a similar Bank or Company FD.

Debt funds have a fairly wide range of schemes offering something for all types of investors. Liquid funds, Liquid plus funds, Short term income funds, GILT funds, income funds and hybrid funds are some of the more popular categories. For long term investors, debt income funds provide the best opportunity to gain from interest rate movements. There is also the short term plans for investors looking to invest for periods of 1-2 years. Liquid funds can be used for very short term surpluses, as a better alternative to surplus money lying in savings bank account. Fixed maturity plans (FMPs) have been gaining in popularity lately as they minimize the interest rate risk and offer good returns to debt investors. Those emphasizing shorter term securities and higher credit quality tend to be more conservative than ones offering longer maturities and lower credit quality. More conservative funds generally hold out the prospect of reasonable returns and low risk exposure, while aggressive funds seek to offer higher returns in return for accepting higher risk exposure. As the relative risk profile of such securities is higher, investors in such bonds expect higher income streams compared to higher-rated bonds.

In the investment world, it is not an either/or scenario between debt and equity. Basic principle of sound investing postulates a diversified portfolio. Though debt funds often may just be the difference between being able to retain the profits and losing it all in the next round of volatility, the main advantage of debt funds is relatively lower risk and steady income in addition to liquidity of investments, professional fund management expertise at low costs besides diversification of portfolio to have a balanced risk return profile. Debt funds also tend to perform better in periods of economic slowdown. We believe that debt should be looked upon as an effective hedge against equity market volatility, which lends stability in terms of value and income to a portfolio. Some hybrid debt schemes take exposure in equities allowing investors to participate in the stock markets as well. As with any mutual fund, investors should look at factors such as performance track record over interest rate cycles, transparency and investment style consistency, before investing in a debt fund.