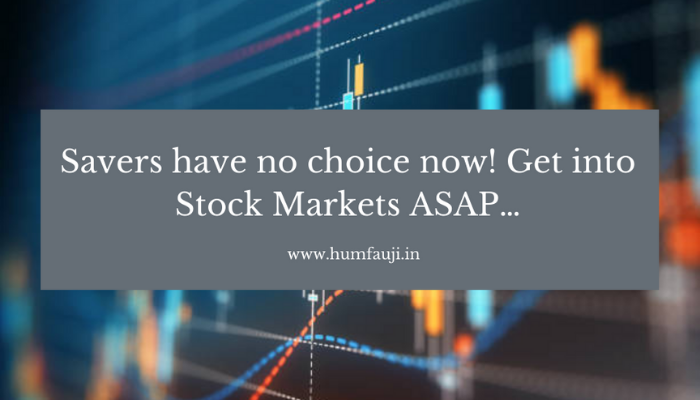 Savers have no choice now! Get Into Stock Markets ASAP….

All hell broke loose – Twitteratti, Whatsappers, media and more were livid. Govt rolled back the cuts the next day. Probably not because of the outcry but realising the official faux pas – elections in 7 states!

How long will the old rates hold? Probably till the next quarter or maybe one more.

Please realise that cutting interest rates so drastically was an act of fiscal desperation. Read on – why?

Why are the interest rates going down? Aren’t they low enough already?

Long story, will try to make it simple.

​What is this and why is it important?

The Debt-to-GDP ratio is the ratio between a country’s government debt and its gross domestic product (GDP). It basically measures the financial leverage of an economy. A country with a high debt-to-GDP ratio typically has trouble paying off external debts (also called ‘public debts’), which are any balances owed to outside lenders. This impacts its Sovereign Credit Ratings (published by Standard & Poor (S&P), Moody’s, Fitch etc regularly), external capital coming into the country, interest rates that outsiders will charge for lending to the country and its public institutions, or even the sentiment of investing in the country as a whole.

All countries like to keep this ratio healthy and thus keep a high Sovereign Rating. But what happens when a crisis like the Covid pandemic strikes?

Government Debts shoot up to support the economy and the people, as we all already know. Most of the emerging economies have government debt that is around 40% to 50% of their GDP. Compared to that, our debt has traditionally been around about 70% of the GDP, which already used to be on the higher side. And this number is now inching up to 90% of GDP, which is not sustainable. India had a fiscal deficit of Rs 18,45,655 crores (9.5% of GDP) in Financial Year 2020-21 and there is likely to be a further additional deficit of Rs 15,06,812 crores this financial year on top of it – these are really huge amounts of fiscal deficits.

So, what can the Govt do to reduce the Debt to GDP Ratio?

It cannot do anything to the ‘Debt’ part because the economy and the poor people have to be supported right now. So, it does something with the GDP. We call the process as ‘Window Dressing’!!

GDP cannot be increased on its own right now since even the economic activity is very low due to the pandemic. But if somehow the prices of the same things can be increased, the total GDP increases.

It will be good to bring out here what is GDP? GDP (Gross Domestic Product) is the final value of the goods and services produced within the geographic boundaries of a country during a year. If the prices increase, the GDP increases even if the actual goods produced remain the same! Hence, the Govt is likely to allow the inflation to go up more and not control it as aggressively as it has done in the past, of course within certain parameters. This increases the overall prices of same amount of things. The Debt/ GDP ratio improves then.

But then, letting inflation run amok is also suicidal. So, Debt also has to be decreased.

Which is the easiest place to decrease Govt debt? Decrease interest rates on borrowings which Govt takes directly from the citizens, that is, the small savings, given in the table at the beginning of this article.

What does it do to you? Double Whammy!

Please look at the chart below to find out whether you’re gaining or losing by investing in so-called safe avenues after the above window dressing by the Govt?

What does it mean? You are losing by investing in any of these avenues. Instead of safe investments, they turn out to be ‘assured risk’ to your money!

Above is the real picture as it will play out for you over the next few months. The choice is up to you – whether you accept it or not. If you feel you’re ready to accept the above figures – “at least the money (or whatever is finally left of it in its real value) is safe with the Govt” – that is a conscious choice you make, with nobody else to blame later.

But what do you do if you don’t like the above picture?

You have really no choice but to go into growth assets. There is no assured safety anywhere but a calculated risk is what is warranted now.

And there is really only one inflation-hedge in the long term. The stock markets.

Most people consider stock markets as risky. We just call them volatile with our long experience.

If you go into equity products with your eyes and ears open, keep a control on your emotions (staying away from the ‘Fear and Greed’ cycle), DO NOT FOLLOW THE HERD, do not watch too much of the 24-hour business channels (our CEO, Col Sanjeev Govila, last watched any of them about 8 years back), do not read too much of ‘prediction-based’ articles on the internet – you are likely to not only protect the ‘purchasing power’ of your hard-earned money but also be able to grow it into a decent wealth over a period of time.

We’ll give you very good and practical ways to go about it in our next episode, due next Saturday.