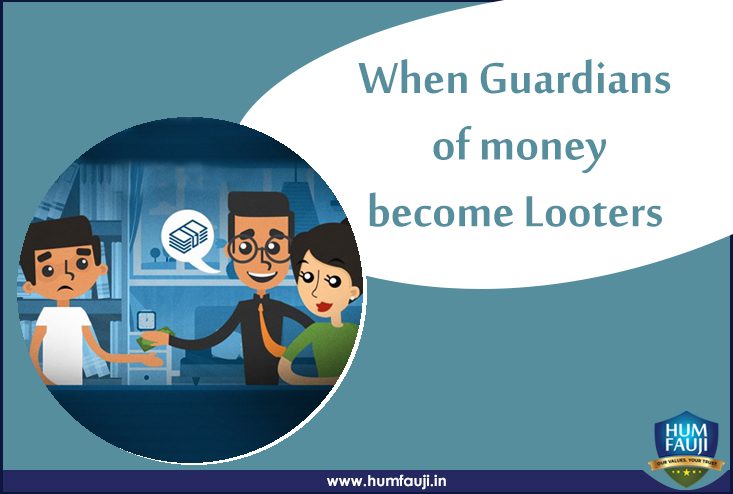 When Guardians of money become Looters

A very informative article which appeared in an online magazine yesterday (06 Mar 2013) regarding mis-selling by banks, taking advantage of the trust reposed in them by their customers.

It is interesting that while we decry corruption, chase individuals like those involved in StockGuru, we are completely oblivious to the systematic large-scale loot of private savings being carried out by insurance companies in the name of unit-linked insurance plans (Ulips) and other such nefarious products. Banks are complicit in this. Initially it was only a few foreign banks but today this is fast becoming the bread and butter for even Indian public sector banks.

I speak from personal experience and I am by no means a soft touch. I taught economics in a college suddenly famous for a recent politician visit where almost every teacher was more concerned about maximizing returns on their capital than in imparting wisdom to their students. My exposure to Ulips started very innocuously in 2003 with a manager of a boutique foreign bank proposing I pay for an insurance policy from a large insurance company with a strong overseas branding for three years and save on income-tax while getting insurance as well as returns on my capital. “The best part is that you can withdraw the money after three years,” he said. He made it seem so simple yet forgot to tell me that there would be a major deduction for this withdrawal. Two years later, he proposed I buy another policy and recycle the capital I would get from the first into it. When the first policy was refunded, I got an annualized return of 3% on it.

In the meantime, I sold a small flat I had and kept the proceeds in the same bank, which had by then become my primary bank. Now here the bank did something extremely unethical. Information was leaked to its “relationship managers” and before I knew it, three executives descended on me offering investment advice. “You need more tax saving this year so you should take out a special Ulip policy at Rs.2 lakh per year for only two years.” I said I didn’t have at Rs.2 lakh to put in the next year but being privy to my confidential information, the executive reminded me that one of the earlier policies would soon mature and I could pay the second instalment.

Two years later, when I went to encash this new policy I was told I would get back only Rs.80,000 out of Rs.4 lakh because the policy was a long term one with heavy penalty for premature withdrawal. I had been sold a dud policy by an executive who had already left the bank. I realized that the bank had a vested interest in making clients shift from one policy to another because of the huge (and I mean huge—between 40% and 60% of the initial premium) incentives given to them by the insurance companies. It would now take six to seven years of very high returns to come back even to the principal amount. To cut a long story short, I dug in my heels, went to the press, wrote to the insurance regulator, the finance minister, the Reserve Bank of India chairman and followed it up with a consumer court case. Both the insurance company and the bank came quickly to my doorstep and asked for a compromise. Thousands of others who were caught in such traps were not so lucky.

As if this was not enough, I discovered the same bank had suggested a dubious art fund that was structured like a mutual fund to many investors like me. Here again, while I was one of the few who just about managed to get his money back, hundreds of others are still waiting for theirs, four years after the scheme closed.

In all these cases, the bank was raking in huge percentages. With such supernormal profits, is it a surprise that banks today are increasingly moving away from their traditional business and are into “products” which earn them easy money?

But the story does not stop here. And either I am sort of a beacon for such products, or this is the ground reality with lakhs of people cheated in this manner. Three months ago, I received a phone call supposedly on behalf of the insurance regulator offering to shift my entire insurance into safe government securities. The condition was that I take out two new policies of Rs.40,000 each. I agreed and set a trap. An executive from a leading private insurance company came to my house to collect the cheques. He was caught. The insurance company claimed this was a rogue broker forcing policies on people by making false promises. Subsequently, I learned that I was not the only one who got such a call. Innumerable people got such calls offering to rectify their defective insurance policies at a cost. Once people pay up, they are trapped forever. I was sure this was not a freak case. Insurance executives are helpless given the demands of their bosses to meet targets. Their dubious means are a by-product of this pressure. No wonder the rate of savings in India is declining so rapidly. Part of it is being absorbed by inflation and part of it is being hidden under mattresses to protect it from the so-called guardians of our money.

Pankaj Butalia used to teach economics at a college in Delhi University. He now makes films.

When Guardians of money become Looters