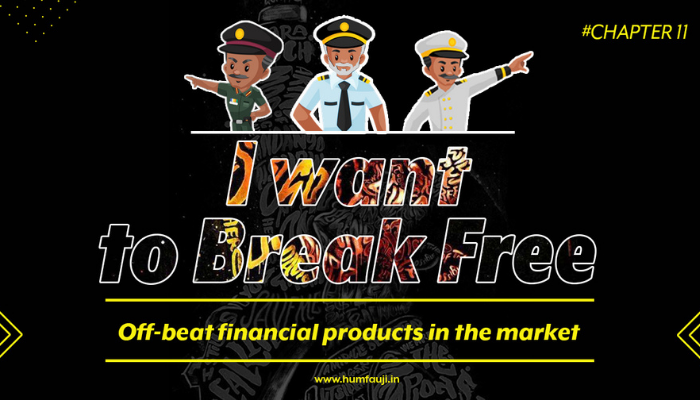 Chapter: 11 | I want to Break Free – Off-beat financial products in the market

The series of discussions over the past few weeks had made AK and Rajesh totally load up on money and investment knowledge. And since it proceeded so gradually, they themselves did not realise that both of them were now discussing it with others and preaching to their own families on this subject that once seemed completely alien to them and a personal taboo!

These discussions also had an unexpected impact. AK and Rajesh’s grown-up children also got involved in such discussions in the house. This resulted in money ideas being discussed among the young and some of it reached their parents too. One of them was asked about Peer-to-Peer Lending (P2P Lending) while the other was asked for his views on the new rage of Bitcoin and cryptocurrency investments.

Naturally, these topics showed up on the WhatsApp group between the trio. Pranav simply said that it would be better to discuss these subjects in person, and not just on chat, since there were many issues involved, other than mere high returns.

As expected, the youngsters were armed with arguments and their fathers carried the same arguments forward to the Golf course coffee discussions.

“I am surprised you did not discuss cryptocurrency and Bitcoin in our previous discussions,” AK began, adding that even the Supreme Court has vacated the ban imposed by Reserve Bank of India on trading of cryptocurrency and its facilitation in India. He went on to sing praises of Bitcoin as it had recently witnessed a massive rally in prices, where the early investors’ investment has already multiplied several times in a matter of months, and more seems to be on the way.

Rajesh, on the other hand, seemed to be more curious about Peer-to-Peer lending as it gives returns upwards of 10% comfortably while their new-age fintech platforms also provide you with analysis to decide on who you should or should not lend based on their AI (artificial intelligence) logarithms.

Pranav listened to all of it and started his comments by reminding AK and Rajesh that no investment is free from risks. In some investments, the risk can be seen upfront while in others, it could manifest itself much later. “Did you know that the same Bitcoin, had crashed by 80% from $17,500+ to less than $3500 in a matter of one year from Dec 2017 to Dec 2018?,” he said, looking at AK.

The problem with such instruments or investments is the unpredictability and unreliability, he said. “Bitcoin is not the only cryptocurrency out there now. There are thousands of them and each one has its own set of complicated rules and calculations. While it sounds fancy from the side-lines, actually dabbling in those waters can be quite risky. I understand that stories of money getting multiplied several times in a few months sounds very enticing, but unfortunately, you have not yet heard the reverse stories, that are equally true,” he said.

Similarly, on Peer-to-peer (P2P) lending, he said, “It is quite likely that the banks do not want to lend money to those people due to their creditworthiness not being up to the mark. Why else would they borrow money from you at an interest rate of 15-21%, when a personal loan from a bank only costs 12-14%? While there could be genuine cases of people borrowing from such platforms for different reasons, including the long time that banks take to disburse loans or somebody not wanting to go through the long process for borrowing a small sum, but in general the principle remains that high reward comes only with high risks.”

“I know these options sound exciting. But in my honest opinion, we are not at a stage to expose ourselves to these options extensively when we are retiring now and really don’t know much about them. At best, a small amount of investment, say, not exceeding 10% of your total investments, can go into these alternate investment options. If you gain, that would be great. If you lose, at least you won’t lose your sleep along with it,” Pranav said.

While AK and Rajesh only raised the two options, Pranav went on to extend the explanation to other options too which are not mainstream. “You might also come across offers to invest in start-ups with promises of massive returns when the start-up becomes successful. Then there are also officially recognised services called Portfolio Management Services (PMS), wherein a fund manager manages your investments by investing in different avenues. None of these bring to the table the safety that we need with our money, especially when it is our lifelong savings.”

Some of these options come with an entry barrier of either high investment amount right at the beginning, or a high fee. “The start-ups and PMS fall in one of these categories. Some people, knowing that you have a large amount of money which you do not know how to invest, may lure you for funding a start-up which may not have much to show on ground. Please do not become their ATM. Similarly, PMS buy high risk stocks to get higher returns due to intense competition in the crowded PMS space and the minimum investment there is Rs 50 Lakhs – do your own due diligence, and an intense one at that. So, you may either gain a lot, or put a mighty lot at stake,” he said.

Rajesh now butted in more confidently in the discussion, “As an investor, it is important that the investment fulfils a few basic conditions. I should be able to understand how a particular thing works. If it is too complicated, it is a potential red flag. Bitcoin and cryptocurrency fall in this category. The second test is if something is too good to be true, it probably isn’t true. Start-ups, PMS etc fall in that category. There would be some caveat somewhere which you should know before going ahead.”

“Moreover, you must also be completely aware about the very high fee you would pay to the PMS service provider. In case of start-ups, it is very likely that you will be a passive partner with no say in the business at all. It is suitable for High-Net-Worth individuals because they adequately diversify to cover the risks arising out of such options,” Pranav explained.

“Yes, now I also understand,” AK said, “Time and again, one or the other such products keeps coming up in the discussions, especially among the young. The core difference to understand is that, at their age, they have a much higher risk-taking ability. Many times, the products and services being discussed haven’t evolved or haven’t gotten refined to be used by an everyday regular retail consumer. Like the other day, a foreign bank person approached me with something called a Structured Product which sounded too good to be true, seemingly with no downside at all. A neighbour in my native place keeps asking me to start participating in his chit fund, which I do not know anything about.”

“While ignoring all such products without even finding out anything maybe an extreme step, it is better to keep gaining knowledge and become aware. If you understand the nuances involved and are comfortable with it, then taking a small exposure would be fine. However, we should always remember the guiding principles. The higher the reward, the higher is the risk. If you remember this, half our problems will be over,” concluded Pranav finishing off the last pakora and the sumptuous coffee to move over to the car park.