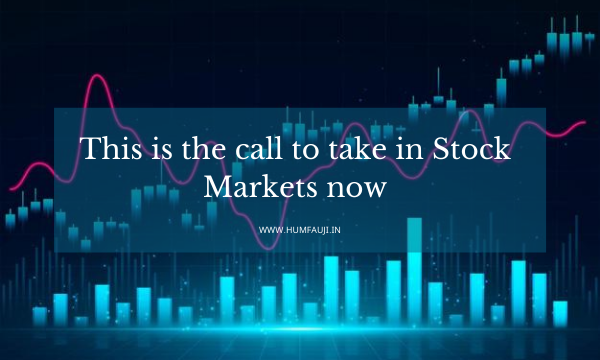 This is the call to take in Stock Markets now

In the month of Feb 2020, as the news of Corona-effect started spreading, the stock markets around the world started going down. They reached their bottom in India on 23rd March, and the stock markets were 38 percent down from their Feb highs within about a month. While such a fast move down was very surprising, equally surprising was that they retraced almost 28 percent of it back within next Four months – something which has never ever happened in the past whenever stock markets melted down so much in this manner.

And this was not all. A few more strange things happened along with it:-

And amidst all this, the stock markets continue to surge !!

Huge liquidity pumped in by the Governments all over the world, idle population taking to stock trading for want of anything better to do while sitting at home, lucrative valuations provided by fundamentally strong companies due to the prices having moved down, etc, are some of the reasons advanced for this surge of the stock markets. The PE (Price to Earnings) Ratio of the stock markets are at a dangerous 29-30 right now when the 22+ ratio is said to be a Sell signal in the markets.

And to complicate the matter further, the inflation which seemed to be going down initially has now started surging up – not because there is a big demand, but because there is huge supply shortage of goods and services. Will it lead to something called stagflation, as it happened in Japan for almost two decades – nobody knows.

So, what are you as an investor to do? And what are we as a financial advisor to tell you?

To help you take a concerted call, we will give out two options, depending on what is your personal call, risk appetite and how much are you ready to hold out. We will also give our recommendation too but please remember that financial advisors are NOT astrologers. Based on a certain sequence of events, a financial advisor can only hypothesize how it is likely to be but the economy and the stock markets are at full liberty to disagree with them!

Hence, a financial advisor should limit his role to guiding you to meet your future goals and aspirations irrespective of the economy in the long run, be the go-to person with slightly more expertise in financial management and manage your emotions so that you do not harm yourself by taking incorrect decisions. A financial advisor certainly should not be in the business of short term predictions of stock market behaviour.

OPTION 1 – Decrease your exposure to the equity markets and move to safer debt funds: Markets are at a high without any valid reasons and the outlook seems poor. A PE Ratio of 29-30, bleak near-term future outlook of the economy, complete resolution of COVID-19 nowhere in sight right now which may take many months or maybe more than a year, even the big companies defaulting, and of course, the accumulated high interests of deferred loans have to be paid soon which most of the borrowers may not be in a position to pay.

All this indicates that the market euphoria may not be justified and the markets have to trend down sooner than later. Hence, better to get out of this sideways-moving stock market while the going is still fair and we are just a few percentage points from the top reached in Feb 2020. It is better to get into safe debt funds which invest in Govt bonds, bank FDs, PSU FDs and similar like products where one gets safety, flexibility of investment and withdrawal, and the huge tax-efficiency if one stays invested for 3+ years.

OPTION 2 – Stay invested as per the worked-out asset allocation and ride out these times: Markets do not go up and stay up on euphoria only but actually factors in at least the next six months. This might, to some extent, explain the behaviour of the markets – they’re seeing something which most of us are not able to see. RBI is cutting rates of interest like all other Central banks across the world. This is bringing down the cost of capital for the companies since almost all the companies borrow money to expand. The Government is putting all its might behind turning the economy around. Almost 70 per cent of the companies have already opened shutters.

Whenever interest rates go down so drastically, markets always go up sooner than later, as per the very basics of economic theory of financial markets – the more the rate cuts, the more grand is the move up. This has always proven to be true in the past. Even today in the markets, whenever any positive news comes, markets rebound like a coiled-up spring. Hence, stay invested and wait for better times to come rather than get out and miss the imminent up move. Even if one gets out, there is no other better avenue available – bank FDs and similar ‘safer’ investments are down and will further go down (next MPC meeting on 6th Aug!), literally giving hugely negative tax-and-inflation adjusted returns. When a bank FD earns you 5.5 per cent with inflation at 6 per cent, the net returns for a 30 per cent tax bracket individual comes to a Negative 2.15 per cent.

So, what do We recommend?

Both the above Options seem feasible due to the very peculiar and unique medico-economic situation prevalent right now. In fact, prominent economists in India and the rest of the world are roughly equally divided between both the camps right now. Finally, it is you who has to decide what is the most comfortable scenario for you, away from the greed-fear-speculation-regret cycle.

If you take Option 1, you get into safety, earn the interest rate prevalent (which though takes your purchasing power to Negative) but also miss out on the rally in equity markets when it comes since timely switch back is a very difficult preposition which hardly anybody is ever able to do.

If you take Option 2, you are open to market vagaries and maybe large volatilities. Nobody knows how long will this medical and economic situation last – may take anything from a few more months to maybe even two years. Nobody can also predict whether the markets will go down from here or not, and if they go down, when will it be and by what count. However, this is for sure that the equity markets will test everybody’s patience and remain volatile for quite some time. However, if you stay invested in equity, when the up move comes, you are right in there and will get the benefit. Due to the extraordinarily low rates, it is likely that the up move of the market will be very strong whenever it comes.

Finally, it comes down to your comfort level. Take the risk since equity has always been about risks and patience. Not be ready to take the risk and take the flight to safety but also miss out on the fabulous gains sure to come – time and extent not known!