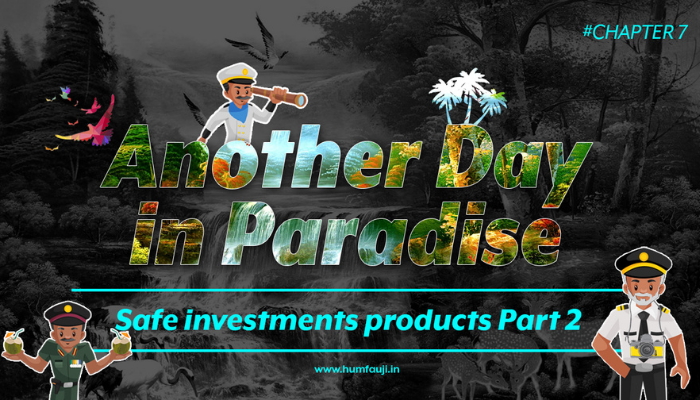 Safety of capital was dear to AK and Rajesh both. The previous discussions had clearly put them on the right path, which was evident from the fact that they had started reading up on financial planning and investments, something they wouldn’t even have dreamt of just a few weeks back. So, their dose of financial knowledge now was not just limited to Pranav’s anecdote-laden monologues over coffee after playing golf.

Not that Pranav was complaining. In fact, he was happy that his friends are being inquisitive about newer things, and that too financial for a change! The next few days, the trio kept discussing the basics again and again in and out. Many examples of friends and family were discussed, as to how easily people go astray when it comes to safeguarding their own hard-earned wealth.

The curiosity and the ongoing news cycles led the new students to stumble upon terms like Debt Funds, Perpetual Bonds, Corporate FDs, among others. They were sure to put their Guru to test the next day. As a heads up, the WhatsApp group buzzed late night alerting Pranav that they needed to discuss something new the next day, and the golf round may need to be cut short!

“When we discussed about safe investment products last time, we only talked about Fixed Deposits and Government Schemes. We figured there are also other safe investment options, like debt mutual funds, Perpetual Bonds and corporate FDs. Any specific reason we didn’t touch upon these,” inquired AK while practicing an imaginary put on an imaginary green.

Pranav began peeling the layers off the concept of safety in the financial services and investments space. “You know, technically nothing is 100% safe. The products we discussed last time have the highest order of safety in the Indian context though. The things you are talking about could also be good for someone who is ready to take some degree of risk, even though it is low risk. After all, personal finance and financial planning is all about context.”

But if we are referring to debt products, what can be the risk? Isn’t the transaction as simple as repaying a loan with interest, asked Rajesh.

“Well, technically yes. What you are saying is right,” said Pranav, adding emphatically that it is also very much possible that the person who borrowed money from you is not in a position to pay the interest or repay the principal amount or even both. “That is the element of risk I am talking about. With government backed schemes like the Senior Citizens Savings Scheme, that is not a worry, as the chances of the government of the day defaulting on such payments is really negligible, to the extent of not being there, unless you’re in say, Zimbabwe or Argentina! As far as Perpetual Bonds are concerned, they are generally issued by the banks and, at least technically, are bonds with No Maturity. However, the banks generally call them bank within 5- years of issuing them and while they are with you, they give a very good rate of interest along with the safety of a bank instrument. However, they are also fully taxable.” he added.

“I’ve also heard about some bonds being issued by our Reserve Bank. I guess they would also fall in the similar safe category”, Rajesh quipped.

“Definitely so Rajesh. I’ve also heard about them. But then when I enquired more, I found that their interest rate varies as per inflation and you are stuck there for Seven years, which seems too long to me”, said AK, proud of his newly acquired knowledge.

Pranav came in, “Yes, RBI Floating Rate Bonds are safe but are for you only if you are OK with the illiquidity for Seven years, full taxability and changing rates of interest. I would rate them good for those in a low tax-bracket and not us. For us, debt funds are a far better option for the 7-year investing duration. That’s because if you stay invested for at least 3 years in a debt fund, the gains are classified as Long Term Capital Gains (LTCG) and you get the benefit of indexation. And on top of that, you pay only 20 percent tax. It would effectively result in a 5-6% tax for you compared to 30% in bank, corporate FDs or the RBI bonds if you hold them for anything more than 3 years”.

“But Pranav I heard that one of the mutual fund company had a lot of problems with its funds and it closed the schemes prematurely? And what is this Corporate FD that you talked about?”, asked AK.

“Yes Ak, a very prominent mutual fund house, Franklin Templeton, closed its six schemes due to some issues during Covid-19 period. But also remember that this was the first time in the mutual fund history in India that such an issue happened. So, we cannot generalise it. Also, we can choose from hundreds of debt fund schemes available as per our requirement since debt funds primarily invest in Govt bonds, bank FDs and corporate FDs only,” continued Pranav, “You asked about Corporate FDs. They are FDs offered by companies. Typically, they give higher rates of interest than bank FDs depending on the company and its ‘credit rating’, and is available in various tenures ranging from one year to up to 10 years.”

“Noted about corporate FDs, but what’s so great about debt mutual funds, apart from taxation, that I should invest in them?” asked AK.

“Debt mutual funds, in fact, bring several benefits to the table. They are very flexible, in that you can invest in them in small lots called Systematic Investment Plan (SIP) or in bulk, take out your money any time in as many instalments as you want or let it lie there for years, shift from one scheme to other anytime and you also have choice of a huge number of schemes with each one having its distinguishing features. As already brought out, they are very tax-efficient if you remain invested for 3 years or more.”

Pranav also went on to explain the Systematic Withdrawal Plan (SWP) in debt mutual funds which is a very powerful way to take an additional pension for an amount and duration as per your choice and start, stop, increase or decrease that too as per your choice anytime. “What makes it an even more attractive proposition is its tax efficiency,” he said.

“For instance, the income you earn as interest in a Fixed Deposit is taxed at a slab-rate, meaning that a person earning Rs 1 lakh as interest on FDs in a year is likely to end up paying upwards of Rs 30,000 if he is in the 30% tax slab. On the other hand, the same person can pay as little as Rs 5,000 tax on same income from if he uses SWP instead through a debt fund, while getting a better rate of interest than bank FDs,” Pranav said.

Keenly absorbing all this new knowledge of the wonderful world of personal finance, the homework was set for AK and Rajesh for the next few days!