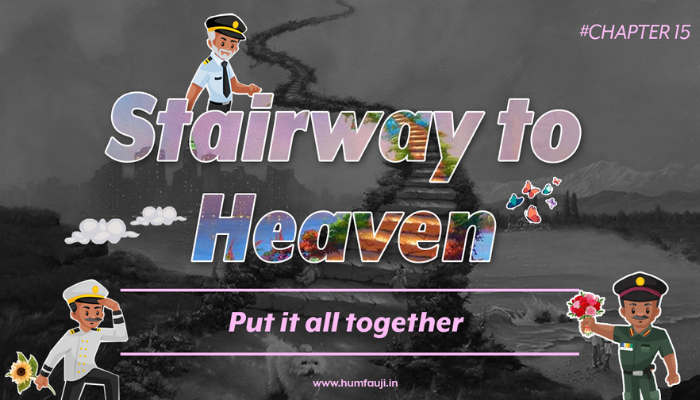 Chapter:15 | Stairway to Heaven – Put it all together

As more time passed, AK and Rajesh became more and more informed about their own personal finances and over time put all the basics as taught by Pranav in place. Despite some resistance from within family and friends’ circles on their biases and ‘their own version of investing’, they remained steadfast on the path of financial well-being.

AK was the first to retire. He had already put his plans of re-employment aside for the time being. His favourite quote nowadays was: ‘Let me first discover the world as it has been waiting for me for a long time to explore’! He was now contemplating a break for a few months to declutter his financial and family affairs and then have a world tour for a few months. Taking a little inspiration from both Rajesh and Pranav, he too was now planning to either pick up a corporate job or work on social causes he believed in.

Over the next few weeks, Rajesh and Pranav also retired. Rajesh was to join his new workplace in next one month in another city. Pranav on the other hand, had already started spending more time in the NGO he had planned to work with.

The golf sessions had now turned into longish gossip and chat sessions. As Rajesh would be relocating to a new place and AK too would be spending less time in their current city, it was a farewell of sorts. Their schedule of playing golf and then having a good coffee-cum-chat had been in place for over 5 years now.

“We have known each other for so long, but isn’t it strange that we started talking about the most important things only in the past few months,” AK said, referring to the entire personal financial discussions they had. “To be fair to Pranav, he used to give us small advice of prudence from time to time, but unfortunately we were too consumed in our own affairs to take heed,” he added, smilingly.

Rajesh acknowledged what AK had just said, and added that the learnings will have huge benefits for him and he was also certain that his kids will reap the bounty. “I am happy that even my kids have now started investing even though they are just in their late twenties and early thirties. With the kind of time on their hands, I have a feeling that they will be happier and more satisfied than even Pranav,” he joked.

Taking the joke further, Pranav said how he was envious that he himself learned all about personal finance only in his forties. “Had I known all this in my thirties, I would have been playing golf with richer people, rather than you both!”

AK reminded the other two that he still needed to take care of his real estate till he finds reasonable buyers. “But I am certain that I will do that gradually without any pressure. Moreover, I am happy about the fact that my thought-process towards enjoying my own life has changed due to our discussions. Though it was tough, I have also been able to convince my wife on the same,” AK said.

They all agreed that retirement life without having to worry about random issues and more focussed on things that could give inner peace and happiness is something they will cherish. Moreover, they had now made it their aim to guide younger generations at home as well as work towards better personal financial management for friends and colleagues.

“It is surprising that so many people around us, including myself, end up making wrong investment decisions. Sensible investment habits need to be made a part of the training curriculum right at the beginning of one’s career, whether institutionally or personally,” he said.

Agreeing with AK’s point of view, Rajesh added that the availability of information is also a factor and that people of their generation cannot be completely blamed for the decisions they took in the past. “When we were young, the concept and availability of new-age instruments like mutual funds wasn’t heard of anywhere near us. Now that such simple and easy to use financial products are available, we will ourselves use them and ensure that our next generation knows about them and other aspects around investing as well,” he added.

Pranav couldn’t contain his happiness and was smiling all throughout the discussion. “I am really glad the discussions helped you and your families. I was afraid at times that I was boring you both,” he said.

“Having the right insurance, a good emergency fund, a practical goal-based financial plan, tax plan as well as an eye on the silent super-killer called ‘inflation’ is all that needs to be considered. Investments and asset allocation are the next important steps. However, for a Golden Retirement, the most important requirement is understanding the difference between wants and needs, and conquering the emotions of fear and greed,” he said, continuing, “and ensure that your kids and other young lads in the family know the basics from a young age. It is not just about starting investments early but also knowing what to start for – otherwise it will not be sustained.”

Rajesh proposed a family get together for the three families to which AK and Pranav readily agreed. “I only have one condition. Let us not turn that into a personal finance seminar,” Pranav jokingly said.